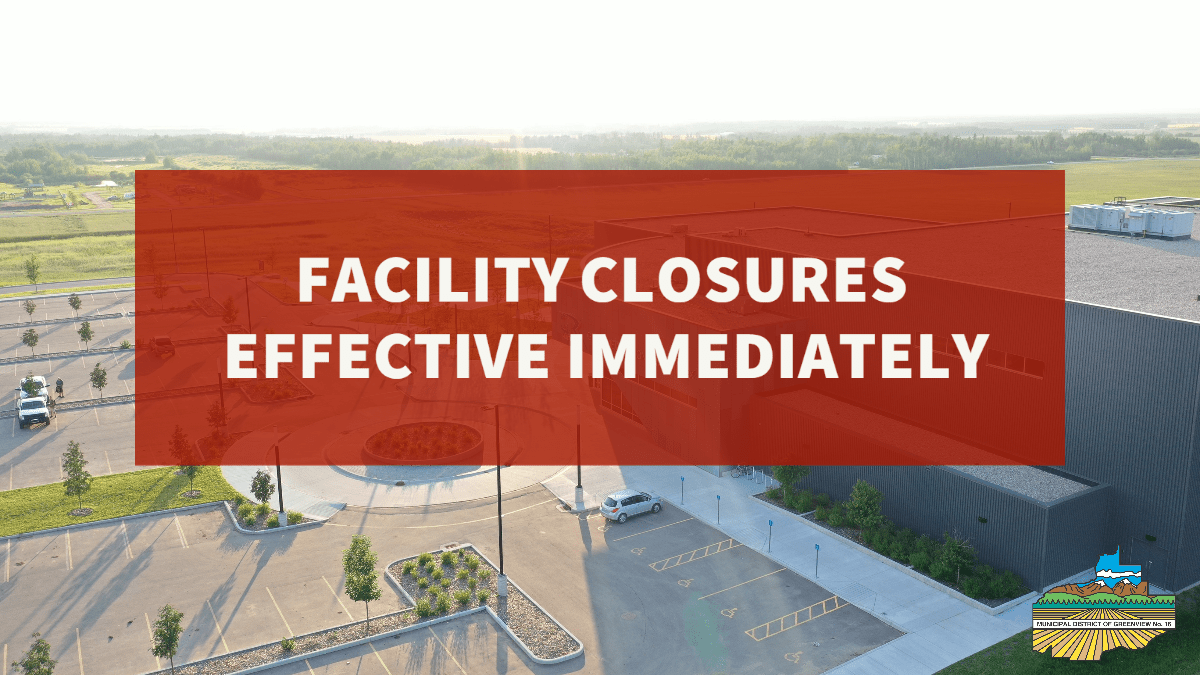 Due to the ongoing developments with COVID-19, the Province of Alberta’s Chief Medical Officer has announced the cancellation of classes for K-12, post-secondary schools, and licensed daycares across the province to help prevent the spread of the virus.

In support of the provincial government’s objectives, the MD of Greenview would like to notify residents and visitors of the additional closures of the Greenview Regional Multiplex, the Grande Cache Tourism and Interpretive Centre, and the Grande Cache Recreation Centre effective as of 12:00 Noon on March 16, 2020. All listed facilities will remain closed until further notice.

END_OF_DOCUMENT_TOKEN_TO_BE_REPLACED

After much deliberation and careful consideration, the Municipal District of Greenview Council has passed a motion,

“to approve the expenditure of up to 50% of the project costs for the twinning of highway 40 for approximately 20 km up to and including the intersection of TWP 700 not exceeding $60 Million with funds to come from the road infrastructure reserves to be provided to the government of Alberta – $30 Million in 2020 and $30 Million in 2021 and that any contributions from other funding contributors be deducted from the MD’s funding portion.”

In recognizing that this infrastructure is owned by the provincial government, Greenview Council gave extensive consideration to this funding partnership. Finding a balance in supporting industry demands, safety for the travelling public, and the future demands of Highway 40 with the development of TMIP, Council agreed to this major funding

END_OF_DOCUMENT_TOKEN_TO_BE_REPLACED

Please note that there is a correction to our news release. We incorrectly reported that our Fire Services stations responded to aid Grande Prairie County Regional Fire Service to extinguish a fire. This fire was located at the Wapiti Open Lodge operated by Horizon North and not the Keyera Wapiti Gas Plant camp as reported earlier. The following information has been provided to us courtesy of Keyera:

At approximately 3:00 am on Monday, February 10, a fire occurred at the Wapiti Open Lodge operated by Horizon North. The camp is located approximately five kilometres from Keyera’s Wapiti Gas Plant and is used by Keyera staff and contractors, as well as other companies. Our primary concern is the safety of our people, first responders and the public in the area. We can confirm there were no injuries to Keyera employees or contractors as a result of the incident.

Fire crews arrived on the scene and began fire fighting operations. Due to the remote location, the water supply was limited, so additional fire units were dispatched from Grande Cache and DeBolt Fire Stations. END_OF_DOCUMENT_TOKEN_TO_BE_REPLACED

A new agreement between Greenview, the County and City of Grande Prairie and the Alberta government heralds a new era of economic opportunity in the region and the promise of a more sustainable future for residents and business alike.

Three years in the making, the TMIP MOU will help coordinate the efforts of partners to the agreement toward the establishment of a world-class Eco-industrial District within the boundaries of Greenview. Located on the Montney Formation, one of North America’s largest conventional gas formations, the district will serve as a global energy and petrochemical-manufacturing hub.  The agreement emphasizes economic diversification beyond resource extraction through investment in a regional value-added sector, supporting the creation of long-term employment growth and opportunities for residents, Indigenous communities, and businesses.

END_OF_DOCUMENT_TOKEN_TO_BE_REPLACED

Focusing on the development of critical infrastructure, maintaining and enhancing important community programs and services, and continued support of regional partnerships and collaborations, Councillors with the MD of Greenview have approved the 2020 Operating and Capital budget with no increase in the municipal mill rate.

Greenview’s combined 2020 operational and capital budget is $217.1 million which includes $52.4 million in project funding carried over from the 2019 budget. Projected revenues from all sources is estimated at $146.1 million including an anticipated $5 million in provincial funding through the Municipal Sustainability Initiative (MSI). Council has authorized a drawdown of $18.6 million from reserves to meet capital funding requirements. END_OF_DOCUMENT_TOKEN_TO_BE_REPLACED

The Municipal District of Greenview Council is pleased to acclaim Ward 5 Councillor Dale Smith as the Reeve and elected Ward 9 Councillor Duane Didow as Deputy Reeve for the municipality at the annual organizational meeting on Monday Oct. 28, 2019. END_OF_DOCUMENT_TOKEN_TO_BE_REPLACED

Reeve Dale Smith attended the Economic Developers Association (EDA) of Alberta Ministry Dinner in Edmonton, October 24, 2019.   As a leader in the Tri-Municipal Partnership (TMIP), Reeve Smith presented an update on the project to key federal and provincial Ministry representatives, provincial and national organizations, Alberta economic development officers, and the International Economic Development Council.   The TMIP was a Gold sponsor for the event, which brought together EDA members and Ministry representatives to network, share information and explore potential partnerships.

With a footprint equivalent to 2/3 the size of the City of Red Deer and access to rail, highway, power, and water, the TMIP will focus on attracting industries which demonstrate leading edge environmentally conscious and sustainable practices.   Development of large scale heavy industrial projects will create long term stable employment, growth, and opportunities for the region.

In 2020, the partnership is looking forward to establishing a formal Development Corporation and hiring dedicated executive staff to manage and promote the TMIP project.

In August of 2019, MD of Greenview was approached by the Valleyview RCMP Detachment Staff Sergeant to discuss the potential of sponsoring a Level One Violence Threat Risk Assessment Training Course.

Administered through the North American Center for Threat Assessment and Trauma Response (NACTATR),
the course is intended to integrate various community agencies such as school divisions, RCMP, Mental Health and Children and Family Services to anticipate the threat of violence by individuals against others or themselves, and to reduce the impact of trauma within communities. 66 participants from within Greenview and surrounding areas will take part in this two-day workshop, held at the Burnside Performing Arts Centre in Valleyview, AB on October 1-2, 2019.

It is timely intervention that prevents school shootings and other violent incidents. The program also looks at longer-term solutions, providing assistance to allow the subject to be reintegrated into the communities and schools. VTRA is used in 281 communities across Canada and in approximately 45% of the school divisions in Alberta. Reeve Dale Smith stated, “The MD of Greenview Council is pleased to provide the funding necessary to deliver this valuable training for people within the boundaries of Greenview. Training like this helps all communities to become safer and better places to live.”

Funding for this training is proudly provided by the MD of Greenview Council.

Media inquiries may be directed to:

The Municipal District of Greenview Council held its 2nd Annual Greenview Charity Clay Shoot on Thursday, September 12, 2019, at the Shot Shell Sporting Clay Range in Valleyview, AB. There were 78 sports shooters participating and 22 corporate sponsors with all proceeds going to the Valleyview, Fox Creek, Grande Cache, and Grande Prairie Food Banks. This years event raised $36,240.00 for Food Banks in the MD of Greenview, doubling last years amount of $17,710.61.

“We are very pleased with our turnout this year for our second annual Clay Shoot Charity event,” said Reeve Dale Smith. “A fundraiser like this would not be possible without the generous sponsorship donations from companies like Tiger Calcium, Paramount Resources, Rural Municipalities Association, Aquatera, Seven Generations Energy, CST Coal, Pembina, Secure Energy, WSP, Accurate Assessment, and many more. We would also like to thank Shot Shell Sporting Clay Range for hosting this valuable fundraiser, and look forward to holding this event for many years to come.”

Media Release: Accident on the Forestry Trunk Road at Kilometer 25

Commercial Vehicle Accident on the Forestry Trunk Road at Kilometer 25

The Municipal District of Greenview would like to inform the travelling public on the Forestry Trunk Road at approximately Kilometer 25, that a commercial vehicle accident has occurred. Travel is restricted to one-way traffic only. The road will be closed to traffic from 10:30 AM to approximately 12:00 PM for recovery of the commercial vehicle involved in the accident. There are no known injuries at this time. Updates will be posted on MD of Greenview social media channels (@mdofgreenview).