Share your best Greenview images before September 8th for your chance to win!

After much deliberation and careful consideration, the Municipal District of Greenview Council has passed a motion,

“to approve the expenditure of up to 50% of the project costs for the twinning of highway 40 for approximately 20 km up to and including the intersection of TWP 700 not exceeding $60 Million with funds to come from the road infrastructure reserves to be provided to the government of Alberta – $30 Million in 2020 and $30 Million in 2021 and that any contributions from other funding contributors be deducted from the MD’s funding portion.”

In recognizing that this infrastructure is owned by the provincial government, Greenview Council gave extensive consideration to this funding partnership. Finding a balance in supporting industry demands, safety for the travelling public, and the future demands of Highway 40 with the development of TMIP, Council agreed to this major funding

END_OF_DOCUMENT_TOKEN_TO_BE_REPLACED 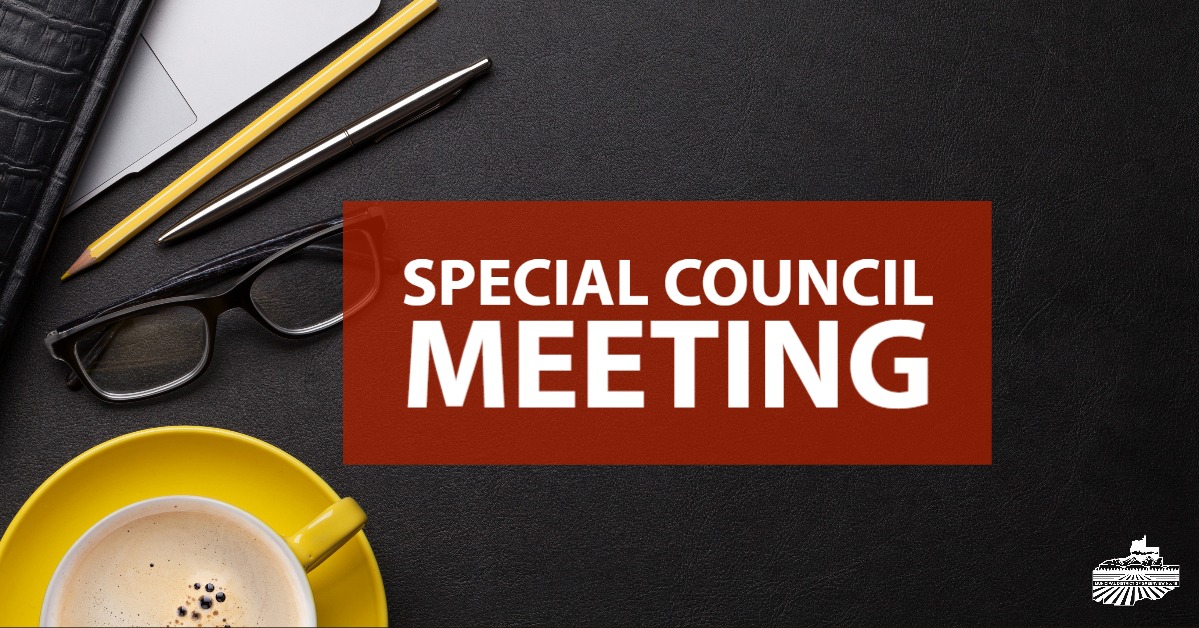 A special Council Meeting will be held at the Grovedale Public Service Building on Feb. 18, 2020 at 1:00 PM. View the full agenda here.

Rapid response to support firefighter safety
Helping to ensure the safety of Grande Cache’s volunteer firefighters, Greenview Council approved funding for the purchase of new equipment at their regular meeting, Feb. 10. Councillors voted to award the tender for the purchase of self-contained breathing apparatus to Rocky Mountain Phoenix of Red Deer at a total cost of $328,330.  SCBAs provide a secure air supply for firefighters and first responders working in areas where extreme heat and smoke may limit available oxygen or where there is a risk of toxic gas or other substances. The purchase means the SCBAs used by Grande Cache firefighters are comparable with those used in MD fire stations in Debolt and Grovedale as well as those utilized by Greenview’s mutual aid agreement partners.

Funding reserves established for Valleyview clinic operations
Greenview Council has given the green light to establish two funding reserves to help address building and equipment costs at the Valleyview and District Medical Clinic. With a full complement of physicians now renting space in the facility, the clinic realized budget surpluses in both the 2018 and 2019 fiscal years, the proceeds of which will be used to establish the two reserve funds. Any future surplus will also be directed to the new reserves to help off-set building maintenance costs and equipment purchase not covered by physicians but required for the continued operation of the clinic such as blood pressure monitors and exam room furnishings.

END_OF_DOCUMENT_TOKEN_TO_BE_REPLACED

Please note that there is a correction to our news release. We incorrectly reported that our Fire Services stations responded to aid Grande Prairie County Regional Fire Service to extinguish a fire. This fire was located at the Wapiti Open Lodge operated by Horizon North and not the Keyera Wapiti Gas Plant camp as reported earlier. The following information has been provided to us courtesy of Keyera:

At approximately 3:00 am on Monday, February 10, a fire occurred at the Wapiti Open Lodge operated by Horizon North. The camp is located approximately five kilometres from Keyera’s Wapiti Gas Plant and is used by Keyera staff and contractors, as well as other companies. Our primary concern is the safety of our people, first responders and the public in the area. We can confirm there were no injuries to Keyera employees or contractors as a result of the incident.

Fire crews arrived on the scene and began fire fighting operations. Due to the remote location, the water supply was limited, so additional fire units were dispatched from Grande Cache and DeBolt Fire Stations. END_OF_DOCUMENT_TOKEN_TO_BE_REPLACED

A new agreement between Greenview, the County and City of Grande Prairie and the Alberta government heralds a new era of economic opportunity in the region and the promise of a more sustainable future for residents and business alike.

Three years in the making, the TMIP MOU will help coordinate the efforts of partners to the agreement toward the establishment of a world-class Eco-industrial District within the boundaries of Greenview. Located on the Montney Formation, one of North America’s largest conventional gas formations, the district will serve as a global energy and petrochemical-manufacturing hub.  The agreement emphasizes economic diversification beyond resource extraction through investment in a regional value-added sector, supporting the creation of long-term employment growth and opportunities for residents, Indigenous communities, and businesses.

END_OF_DOCUMENT_TOKEN_TO_BE_REPLACED 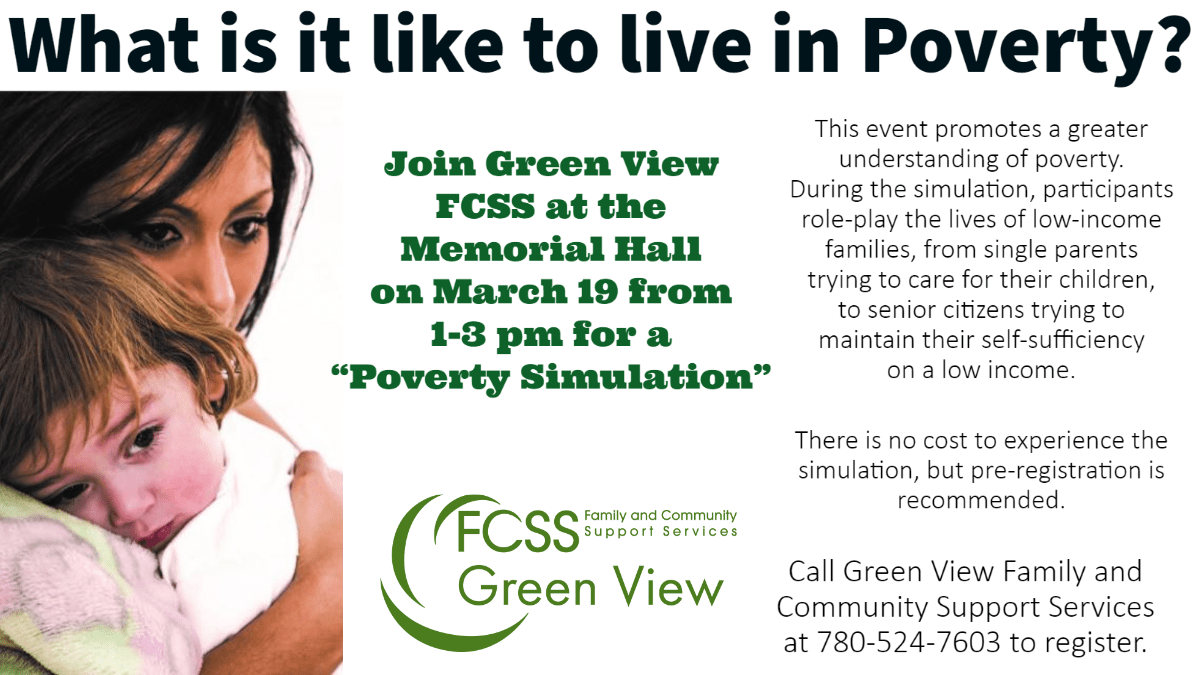 Green View Family and Community Support Services (FCSS) is hosting an innovative session allowing residents from throughout the MD the opportunity to come to know and better understand the hardships that those living in poverty deal with every day.
Community Action Poverty Simulation (CAPS) is not a game, but an interactive, immersive experience where individuals are confronted with daily stresses and challenges stemming from poverty.
Participants in the Community Action Poverty Simulation are provided with profiles of real people coping with financial crisis, taking on the role of those struggling to make ends meet. From a single parent trying to find the dollars to provide the essentials for their children, to seniors on fixed incomes dealing with rising costs and the perceived shame of “being poor”, the Poverty Simulation creates a greater awareness of the social and cultural impacts of poverty and helps to shatter some of the myths and misconceptions about those suffering those impacts.
The simulation also offers participants an opportunity to discuss their experiences and be part of a larger conversation on ways to take action to address poverty in their communities.

The simulation is offered free of charge, however, those wishing to participate must pre-register by contacting Lisa Hannaford, Green View FCSS manager, at 780-524-7636.

Looking for an effective, cost-efficient way to provide high-speed internet service to Greenview businesses and residents, Greenview Council approved funding for the development of a fibre optics internet connectivity strategy.

Council has selected Canadian Fibre Optics, a Calgary-based firm, from among five bids submitted for the project, approving a maximum of $65,150 in funding. Council recognizes the increasingly important role of internet access in supporting local economic development across Greenview, particularly in helping to grow Greenview’s agricultural sector.

Canadian Fibre Optics has a history in the region, having constructed a 225 km fibre optics “backbone” in the Highway 40 corridor, between Grande Cache and Wembley. While the potential of fibre optic technology for service delivery will be explored, the study will also look at options utilizing standard coaxial cable. Administration also noted that the study could also be used to help develop an “open ground” policy which would seek to identify opportunities to combine projects like the installation of internet network infrastructure with other industrial development initiatives that require trenching, such as pipeline construction.

END_OF_DOCUMENT_TOKEN_TO_BE_REPLACED

Because minutes often mean the difference between life and death for an accident victim or anyone experiencing a major health crisis, it is reassuring knowing that STARS is still in the skies and en route to the scene.

The MD of Greenview is a proud STARS supporter and sponsor of the 10th Annual STARS Hangar Dance, a major fundraising event in support of STARS Air Ambulance. At their Jan. 13 council meeting Council voted to provide $2,700 in sponsorship funding to the Grande Prairie Petroleum Association for hosting of this event, Feb. 1.